Calendar
Events
Shop
Auction
Employment
Directory
Contact
myRegis
Fr. Andreassi Paints Vivid Historical Portrait of Regis High School During Book Release
Despite the heavy snow and freezing rain—which forced the cancellation of Regis classes earlier in the day—a packed auditorium of alumni, family, and friends braved the weather on Wednesday, February 5th to attend the official unveiling of Anthony D. Andreassi, C.O.'s Teach Me To Be Generous: The First Century of Regis High School In New York City. The evening showcased Regis High School's rich history with a presentation and a reading of a few select paragraphs from the book, which now constitutes the most comprehensive account of the first hundred years of Regis. 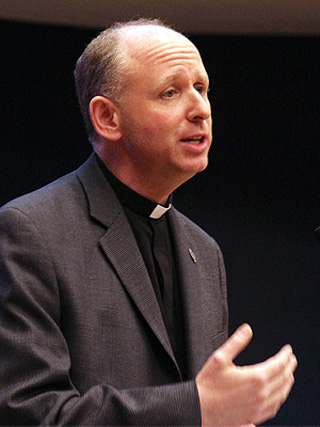 To add to the festivities of the evening, the Regis auditorium received a Centennial makeover in advance of the book release. Upon arriving in the auditorium, guests were treated to large banner displays of historic Regis photographs, an on-stage slideshow of Regis through the years, and vibrant Regis red and white bunting adorning the facade of the auditorium's balcony and stage. Music from the early 1900's helped set the mood by playing softly in the background, and a commemorative Centennial pen and bookmark honoring the special occasion awaited guests as they arrived at their seats.
Rev. Philip G. Judge, S.J. '80 began the evening's official program by welcoming guests and introducing Fr. Andreassi. A priest of the Brooklyn Oratory of St. Philip Neri, Andreassi holds a doctorate in history from Georgetown University with a specialization in the history of American Catholicism. He has taught history as a member of the Regis faculty since 2003.

Back in 2005, when Fr. Judge began his Presidency at Regis, Andreassi was first commissioned with the daunting task of establishing and cataloging the school's official archives. During that time, the notion of a scholarly history of the school was also explored. The archival reasearch and work during those years leading up to the Regis Centennial is what inspired and ultimately led to the now-published account of one of America's most fascinating Catholic secondary schools.

With entertaining anecdotes intertwined alongside a wider historical context, Andreassi's presentation led those in attendance on the evolution of Regis through the decades of the twentieth century to the present day—from the generosity of a devout Catholic widow, through the Depression and World War II, to changes in demographics of the Catholic community and shifts in the landscape of Catholic education in New York City.

After completing his overview and the anecdotal passages he read throughout, Andreassi opened the floor for questions. An interactive and entertaining dialogue with the audience ensued. After a sustained round of applause, the event reception continued and Fr. Andreassi greeted guests and signed purchased copies of the book.

In January, the Centennial celebrations officially commenced with the ringing of the Closing Bell at the New York Stock Exchange (Read More: Regis High School Rings In the Centennial Year at the New York Stock Exchange | January 17, 2014). A robust list of upcoming Centennial events includes a Classroom Revisited day featuring presentations by prominent alumni, a Centennial Film Festival celebrating Regians that starred in or that helped produce Hollywood blockbusters, and the school's marching in the New York City Saint Patrick's Day Parade (for the first time since the late 1940's).

The year-long celebration will culminate with the Centennial Gala at the Waldorf-Astoria on October 25th, followed the next day by a special Centennial Mass at Saint Ignatius Loyola Church. The mass will be celebrated by His Eminence Timothy Michael Cardinal Dolan, and Bishop Frank J. Caggiano '77 will serve as homilist. For more information on these and other Centennial events, please visit regis.org/2014.

An encore presentation of Anthony D. Andreassi, C.O.'s Teach Me To Be Generous: The First Century of Regis High School In New York City will take place at Regis High School on March 3rd. For more information about that event, please call the Office of Development at (212) 288-1142 or contact mseltzer@regis.org. 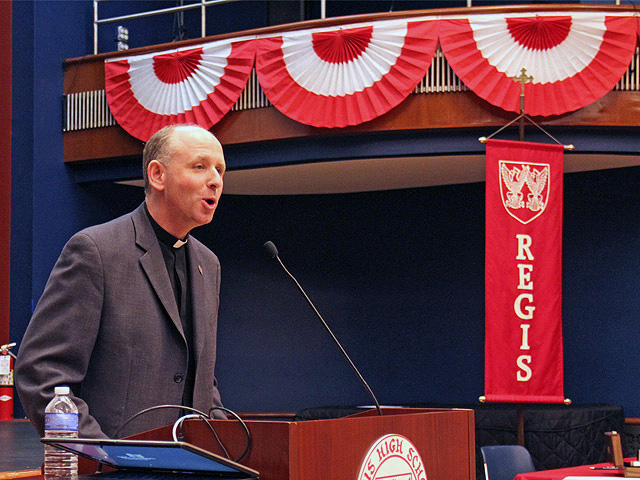 Above: Despite the heavy snow and freezing rain, alumni and friends packed the auditorium and listened intently as Fr. Andreassi presented an overview of the history of Regis High School. 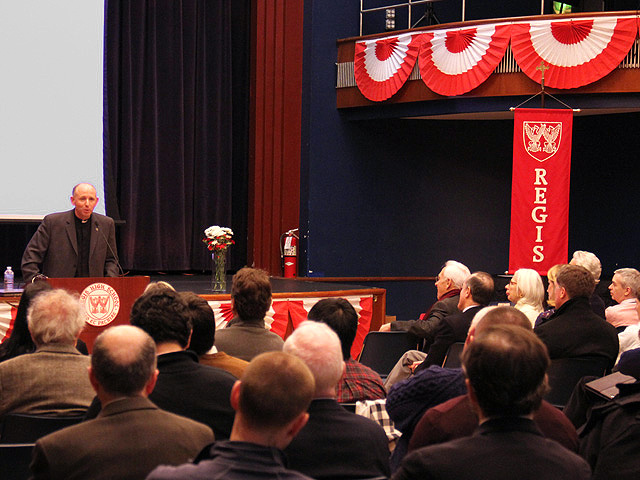 Above: After completing his presentation, Fr. Andreassi conducted an interactive and entertaining dialogue with the audience. 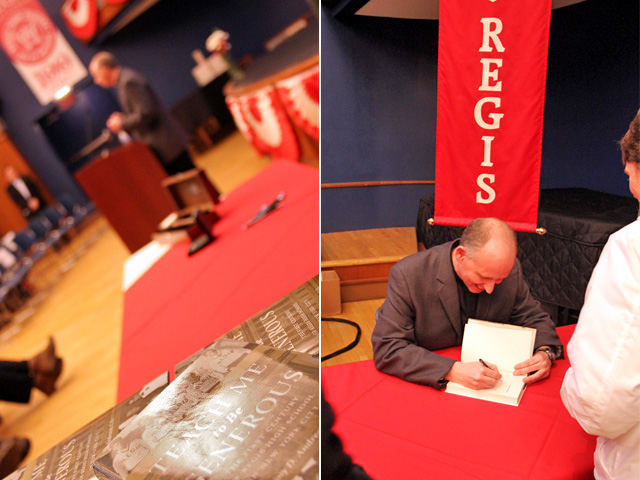 Above: Following the Question and Answer session with the audience, Fr. Andreassi greeted guests and signed purchased copies of the book. 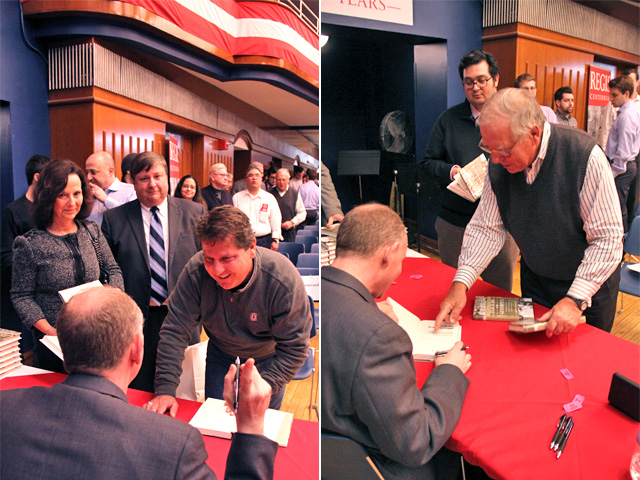 Above: Parents and alumni from all generations waited patiently in line for their opportunity to meet Fr. Andreassi and have him personalize their copy of the book. 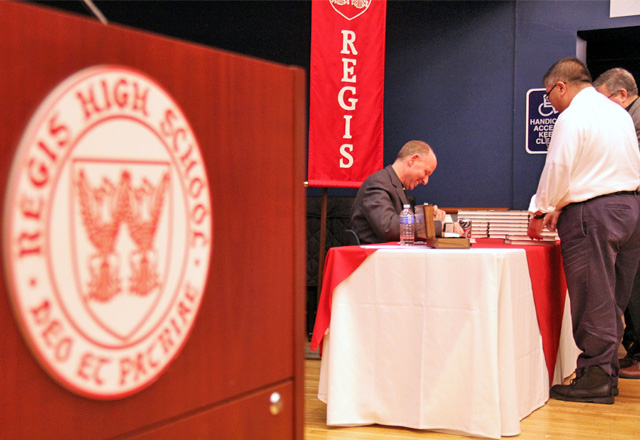 Above: Wednesday's official book release for Andreassi's Teach Me To Be Generous: The First Century of Regis High School In New York City was the first Centennial celebration to be held at Regis High School. 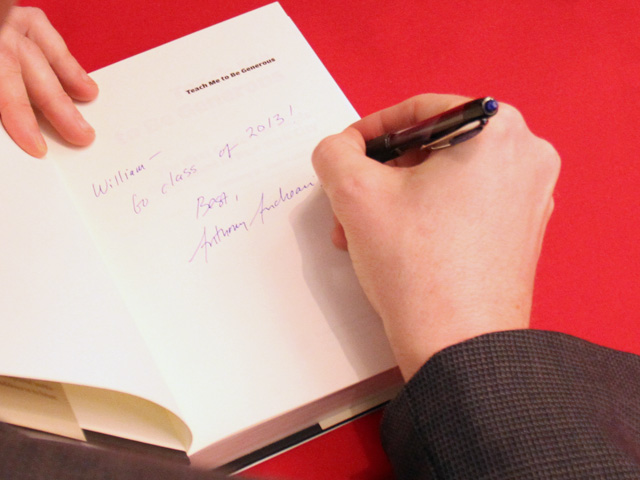 Above: Fr. Andreassi pens a personal note to a recent graduate of Regis High School.