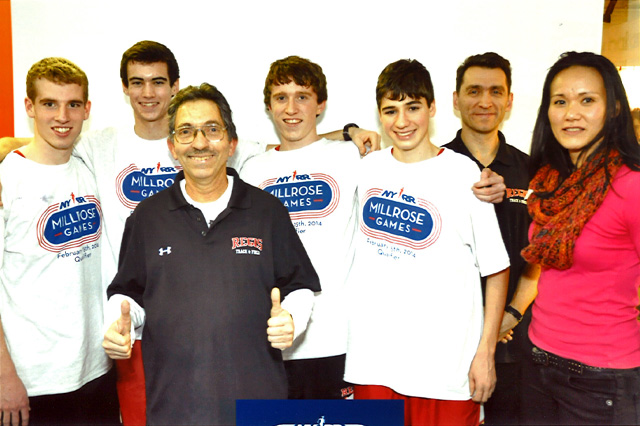 In what Coach John Donodeo described as "one of the most epic Regis Track and Field performances ever", the Varsity Track 4 x 800m relay team qualified for the 2014 world-famous Millrose Games last night due to the team's outstanding effort at the Millrose Trials competition.

Competing in a relay race that featured the fastest 4 x 800m high school relay run recorded in the United States this year, the team of Brian Dobkowski '14, Drew Kiley '14, Arthur Calcagnini '15, and Sean Phillips '15 ran the "races of their lives", taking fifth place with a fantastic time of 8:07. The Regis team is now ranked 12th in the nation in the 4 x 800m relay.

The Millrose Games is a world-class annual indoor athletics meet that features some of the top Olympic runners, as well as many of the top collegiate runners in the United States. The competition is held at the Armory in Washington Heights, which houses one of the finest tracks in the country.

The Regis team will compete alongside a team from Fordham Preparatory and Xavier in the prestigious Millrose Games on February 15. This will be the first time that these three local Jesuit schools (Regis, Fordham Preparatory, and Xavier) will compete in the same year at the Millrose Games. This is the first trip back to the Mellrose games for Regis since 2010, when Mario Lavelanet '10, Myles Phillips '10, Ryan Phillips '12, and William Weinlandt '10 finished in 4th place overall.