Following eight years of Jesuit education (he was a 1948 graduate of Fordham University) McGarry began a career in radio and television that would go on to span six decades. According to the Washington Post, McGarry covered presidential inaugurations and the start of the Korean War. He also hosted a big-band radio show, was an early TV sparring partner of Willard Scott and appeared with a young Jim Henson and his Muppets.

But it was hosting the popular television program It's Academic by which most will remember McGarry. For five decades, the noted quizmaster moderated the Washington, D.C.-based quiz show. McGarry stepped down in November 2011, and officially passed the baton to the show's new host in 2012.

During his tenure on It's Academic, McGarry played host to a number of young students who themselves would earn fame in their future careers.


In a 2012  interview with fellow Regis alum John Donvan '73 of NPR, McGarry discussed the evolution of It's Academic through the years. The conversation included a brief exchange acknowledging that both men attended Regis.

McGarry noted, "What a special pleasure to meet a fellow alumnus of one of America's greatest high schools, Regis... I'm only a few decades ahead of you, John."

Donvan was quick to add, "It's true. We both attended Regis High School. And where I had the advantage was that in my time there was a show called It's Academic, and I remember going to the taping, to the New York version when Regis competed ... It was a great memory."

Donvan's interview with McGarry details that—after a few years of taping—the producers of the show began encouraging schools to send cheerleaders and school bands to accompany the contestants in the studio.

"It was a tribute to the scholarship of the young contestants that it had all the trappings of a football game," said McGarry.

One school's support group happened to include future movie start Sandra Bullock, who came with her high school team and served as a cheerleader in the studio that afternoon.

The full transcript of the interview can be read on the NPR website. 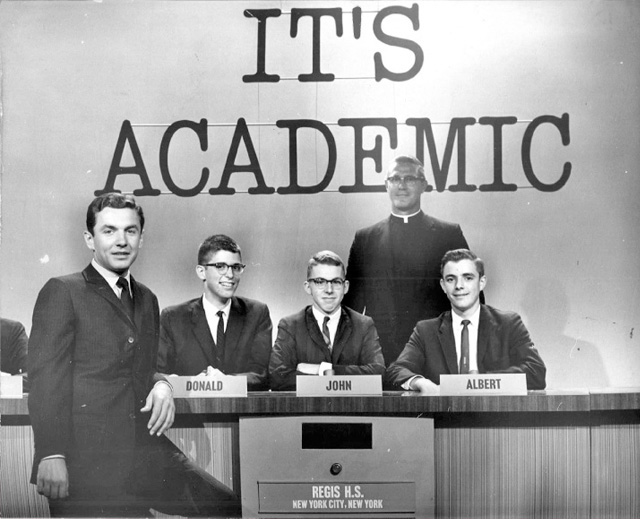 Regis High School began competing on the New York version of It's Academic as early as the 1950's, as evidenced in the above, undated photo from that decade.

In his interview with Donvan, McGarry reflected, "Yes, I remember when New York started its version of the show, about two years after Washington. The host was the late Art James. He came down to see how it was done in Washington and brought it all back to New York."

Donvan noted, "When I was a freshman, I wasn't eligible for the team but our — we put some seniors on the team. Tragically, they did not win for me that day."