Calendar
Events
Shop
Auction
Employment
Directory
Contact
myRegis
The Owl Interviews Bishop Caggiano ‘77
The October 2013 Issue (Volume 78, No. 1) of The Owl, Regis High School's student newspaper, published a student interview with Frank Caggiano '77, newly installed bishop of the Diocese of Bridgeport. Below is a reprint of that interview. 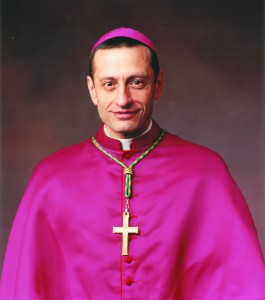 The sudden ringing of the telephone startled Frank Caggiano in the early morning hours of a Wednesday in late July. Curious to know who might be seeking him at such an hour, the fifty-four year old auxiliary bishop of the Diocese of Brooklyn promptly strode across the room and answered the call. The voice on the other end spoke from Rome, informing the Italian-American clergyman, an alumnus of both Regis High School and Yale University, of his appointment as the bishop of the Diocese of Bridgeport.

Recently, the Owl had the privilege of having a conversation with the bishop discussing his background, his experiences as a student and as a priest, and his outlook on the years ahead.

The Owl: How did you feel when you learned of your appointment? Did you speak personally with Pope Francis?

FC: I did not get a chance to speak to Pope Francis himself. Usually, when an individual is appointed to a high-level position in a diocese, the appointee’s Apostolic Nuncio relays the news from the Holy Father. He happened to be in Rome when the Pope informed him of my appointment. Actually, his second-in-command ended up calling me. My first instinct was that it was a classmate playing a joke on me. When reality set in, though, I was shocked. For about a week, until I received confirmation from Rome, I experienced a constellation of emotions. I was nostalgic, knowing that I would soon have to bid my friends in Brooklyn goodbye, yet extremely excited for what I would experience in Bridgeport.

The Owl: As the head of a diocese, what are your responsibilities?

FC: A bishop’s role is defined in a number of different ways: as the leader of the Diocese of Bridgeport, I will serve as the chief shepherd, catechist, and leader of prayer. As chief shepherd, the bishop has the final say in all administrative matters. As a catechist, I am the lead custodian of the faith. It is my responsibility to guard the truth contained in Christ’s teachings that has been handed down over the last two thousand years, and that has witnessed much blood shed on its behalf. Lastly, my position as the leader of prayer is one I find very exciting. I believe that in the Church, authority is service; it allows individuals to grow and improve themselves.

The Owl: Did you feel called to the priesthood as a young man?

FC: I worked for McGraw-Hill for a time, and I was treated well during my tenure there, but my employment ultimately didn’t have the value I was looking for. I didn’t particularly care if customers bought my books; I didn’t have a passion for it. I did, however, experience a desire to serve the church and to minister to God’s people. For that reason, I took a leave of absence at Yale to go to seminary, but I found that I didn’t really care for the priesthood. I went back to Yale, and eventually to McGraw-Hill, proceeding with my life but not finding any particular fulfillment. At that point, I realized that I could either have it my way or God’s way. I decided God’s way was best and returned to seminary.

The Owl: What can you tell me about your time at Regis? Do you have any memorable stories to share? What were the courses like?

FC: In my case, Regis was not a choice I wanted to make. All of my friends from my neighborhood in Brooklyn went to Xaverian, and I wanted to go there too. My father would not hear of it. He held up two envelopes, one from Regis, one from Xaverian. “In this envelope,” he said, “is a letter from a school could cost me a lot of money over the next four years.” He then showed me the letter from Regis. “In this envelope is a letter from a school that’s going to be much easier on my wallet. Which school do you think you’re going to?” Once I choose to accept my fate, Regis blew my world to pieces. Going to class with young men from all five boroughs and beyond was a life-changing experience for me; the learning environment is an education in and of itself. I’m grateful to my father for his encouragement, the people that I met, and for the friends that I still keep in touch with. I feel that at Regis, friendships are much different than at other schools. They are relationships you maintain, and your friends offer experiences that broaden your horizons. My friends and I had some grand old times.

The Owl: What about your studies beyond Regis?

FC: After I graduated, I went on to major in Political Science at Yale. I took a leave of absence to attend seminary before I returned to Yale, finished my degree, and began to work for McGraw-Hill. I left McGraw-Hill to enter the Seminary of the Immaculate Conception in Huntington, Long Island and was ordained a priest in 1987. Four years later, Bishop Daily assigned me to graduate studies at Gregorian University in Rome. I spent five years there, and eventually earned a doctorate in dogma. I had an exceptional director for my doctoral dissertation. His name was Michael McDermott, and he currently works at Sacred Heart Seminary in Detroit. Writing my dissertation required me to think in largely unfamiliar terms as I had done at Regis. I worked with thousands of pages of primary Greek text and wrote the paper in eight months. I had never attempted something of that magnitude before, and haven’t since then.

The Owl: What do you anticipate your tenure as bishop will be like?

FC: Through the workings of grace in my own life, I have had the great privilege of catechizing the youth. Your generation is much different in that you have grown up in an age of electronics, the Internet, and social media. The printed word revolutionized society, and these developments will too. No one knows more about these new institutions than young people; therefore, it is our job to encourage this new generation because the future of the Church rests in their hands. They need to know that although the transmission of the faith may evolve with technology, the substance remains the same.

The Owl: What challenges do you think you’ll face as bishop?

FC: Effective evangelization will definitely present some issues. I will also have to work alongside other bishops in rebuilding trust in the Church after the many scandals that have shaken it in recent years. These are largely universal challenges that the Church faces in all locales, but I’m sure they will be especially present in Bridgeport.

The Owl: Once you settle in, is there a chance that you’ll be back to visit your alma mater?

FC: Absolutely. I would be delighted to come if Father Judge invited me. I have already been invited to the hundredth anniversary celebration, which will take place in the fall of 2014. Cardinal Dolan will be the celebrant, but I was asked to be the homilist. I was incredibly honored by this offer. I’m hoping to come sometime before that, though.