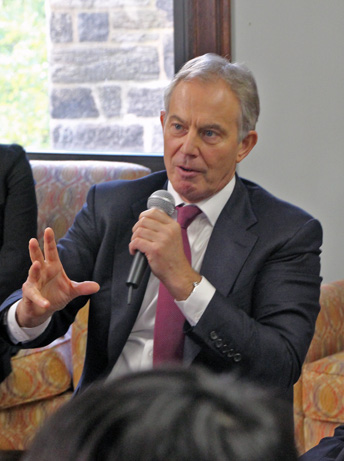 This morning, Former British Prime Minister Tony Blair and Regis High School students enrolled in the Comparative Religious Ethics senior elective participated in a special video conference with students from the Islamic Educational College in Jordan. Mr. Blair was originally scheduled to join the video conference remotely, but instead made a surprise visit to Regis High School to join the student discussion in person.

Mr. Blair’s visit to Regis is believed to be the first ever by a former or current Head of Government.

The conference began around 8:30 a.m. with students from both schools describing their communities, detailing common religious stereotypes, and sharing thoughts on beliefs and traditions that matter most to them. The dialogue evolved into a discussion about why religious literacy is important.

Religious literacy refers to the knowledge of—and ability to understand—different religions. Given the increased integration among different faiths and cultures within our global society, religious literacy has become an increasingly important issue worldwide.

The Tony Blair Faith Foundation, established in 2008, works towards providing practical support to help prevent religious prejudice, conflict, and extremism, and is committed to constructing peaceful co-existence among people of different faiths. The Face to Faith initiative is an educational program of the Foundation that contributes to a variety of subjects, including the Humanities, Religious and Cultural Studies, and Social Sciences. The program has been a major focus of Mr. Blair’s work since his departure as Prime Minster of the United Kingdom. 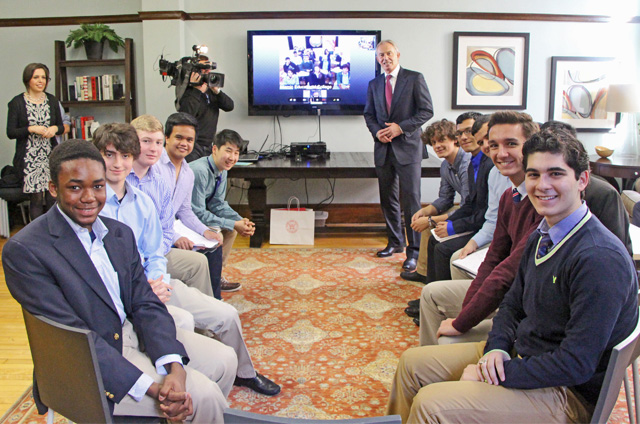 Above: Mr. Blair and Regis students pose for a photo with the students from the Islamic Educational College in Jordan, seen on the video conference screen.

As the morning’s video conference continued, students from both Regis and the Islamic Educational College discussed their experiences with Face to Faith and its impact on them. In the midst of these discussions, Mr. Blair entered the Regis conference room to the great surprise of the Regians present. The former Prime Minister provided some personal thoughts and reflected on his own experiences before asking students to comment on their experiences and how they overcome religious stereotypes. Following a question-and-answer session during which Mr. Blair fielded questions from students, a lively discussion ensued. 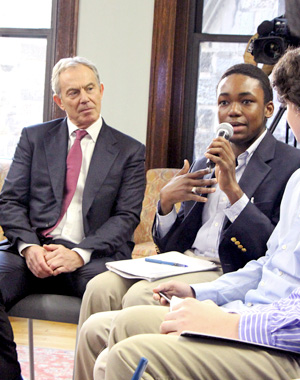 The conference concluded with students and Mr. Blair providing reflections and takeaways from the discussion.  Mr. Blair shared that "we succeed best when we accept the obligation to build bridges of understanding through learning about others' faith, and are prepared to deal in humility and respect with those who don’t understand." Before departing from 84th Street, Mr. Blair thanked Regis High School for its participation in the Face to Faith program, and posed for pictures with Regians.

Mr. Blair was scheduled to address the United Nations later in the day to stress the need for education across cultures and faith lines. His visit to the U.N. follows an earlier visit in September, when he and U.S. Secretary of State John Kerry addressed the U.N. on the issue of combatting religious extremism.

The work that my organization does, and the work of many others, is about not just the uprooting of terrorism, but the uprooting of the thinking and philosophy behind it. I believe there is no answer to this problem that doesn’t start and continue with the importance of educating our young people. So that in a world in which people are pushed ever closer together, they learn to live with each other with mutual tolerance and respect.

Regis High School, under the guidance of Theology faculty member Mary Katherine Sheena, has been a participant in Face to Faith for the past 5 years. The efforts of Ms. Sheena and other educators across the globe who participate in the Face to Faith effort exemplify the good work of the Tony Blair Faith Foundation.

"Face to Faith has been a wonderful resource for Regis and truly embodies the Ignatian ideal of being open to growth. The program encourages students to become global citizens who are interested in learning about the world around them," said Ms. Sheena. "It gives each of them an opportunity to reflect on their own attitudes and beliefs and provides a platform to engage in meaningful dialogue with students from around the world."

Founded in 1914 by an anonymous benefactor and supported by the generosity of her family, its alumni and friends, Regis High School offers a tuition free Jesuit college preparatory education to Roman Catholic young men from the New York metropolitan area who demonstrate superior intellectual and leadership potential. In the admissions process, special consideration is given to those who cannot otherwise afford a Catholic education. In 2014, Regis celebrates its Centennial, and remains the only all-scholarship Catholic secondary school in the western hemisphere. 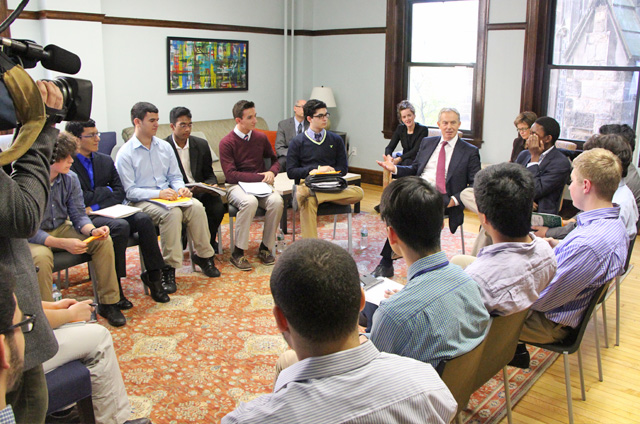 Above: Mr. Blair provided some personal thoughts and reflected on his own experiences 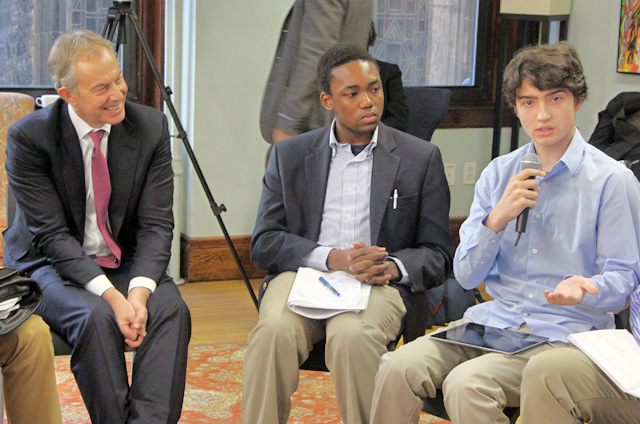 Above: Students shared their thoughts on religious literacy with Mr. Blair and the students from the Islamic Educational College in Jordan. 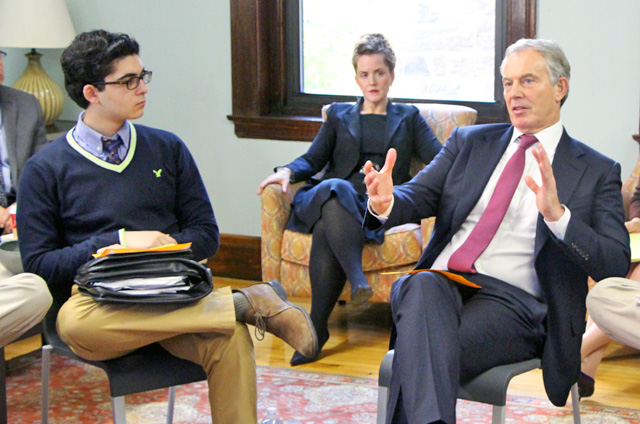 Above: The former Prime Minister provided Regians with his own reflections and takeaways from the discussion.